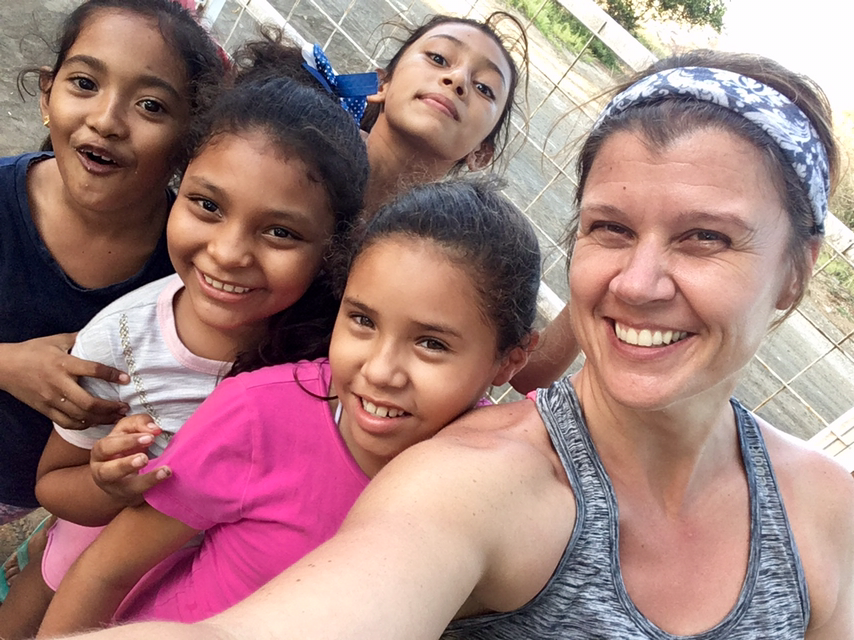 At the end of the day, we debriefed as a group of teachers and revisited all strategies.  They had very positive things to say and all desired to learn how to use some of the math and reading strategies I presented to them that day.  Personally, I was so proud of myself for reading all of the books in Spanish fluently and also speaking about 80% of the time for myself to the kids and teachers without the help of my interpreter and other lead teacher, Cathy.  It connected me more with the teachers and students and also allowed me a chance to grow in my language skills while here.  My only regret is that there are very few pictures and no video of the entire day.  But that is because we were all truly in the moment and just being with the kids and the teachers 😊

After the long day of teaching, we headed down the beach to the home of an expat that Angie and Dustin used to live next to for a few hours and enjoy their pool and their company.  We then headed back to the house for dinner and sat around the outdoor table for a while before turning in for the night.  I went to bed just so gratified with what I was able to bring to the teachers here and how much I was able to interact with the students, playing games, teaching math, and reading.  I still really struggle with conversations out of context and understanding the teachers and students when they speak, but that is to be expected and can only improve with time and exposure.

The rest of the afternoon I led four more reading groups and continued to model for the teachers strategies to help with reading comprehension, student dialogue, and engagement.  At the end, the teachers had their wrap-up meeting and I shared various other strategies that I didn’t have time to model and allowed them a chance to see all of the books that had been brought to them thanks to donors back home.  We brainstormed ways that they could use some of the new strategies to teach with the new books.  I then gave them all parting gifts, as I wouldn’t see them again before leaving on Sunday.  They were all so thankful and so grateful and asking when I would return and if I would come stay for longer and teach with them.  These teachers are amazing and genuinely desire to be effective teachers and engage the students and create success for the youth in the community.  They promised to continue shouting “fantastico!” for me and also to try and be more loud and crazy like me when they read stories to the kids 😊
​
I am grateful that Angie, Dustin, and Cathy were all able to capture some photos and videos for me so that I can share my crazy with my family and students back home and share the love and joy found on this journey in Nicaragua.
After a long walk down the beach this morning, I had a chance to work with Angie’s son, Nolan, on his mathematics.  He is 14 and takes mathematics online.  However, I had brought math manipulatives with me and Angie wanted me to work with him on using algebra tiles to understand concepts further.  We had a great time and he truly enjoyed the chance to see mathematics differently and to struggle through a concrete way to see abstract concepts.  I rarely have the chance to tutor a kid that wants to learn on the beach with coffee in my hand!  I’m thinking that was a once in a lifetime opportunity…..

About 10am Cathy came with about six students from the English club and they spent the time making bracelets and then Emelina and her mom and little brother came at 1pm to make pizza with us and to hang out for a while.  I got a chance to give her letters from my students in the states and give her a few presents that were for her, including two of the most incredible crocheted dolls made by a student at my HS.  She was so excited and you could tell she felt so special.  I found out that one of her most favorite things to learn is sewing, so she was truly intrigued by how the dolls were made.

What struck me most about Emelina in my time with her is how loved and secure she seems.  There are many places I go where the girls are so starved for affection and attention that they cling to you, or they want what you have so badly that they won’t leave your side.  But Emelina was happy, confident, and clearly loved by her family.  Her mom said that she sleeps with her elderly grandma every night and just adores her family.  She is quietly mature for her age, as many girls are here, but she also manages to be a fun-loving child.  I think that is what I appreciated most about the dolls.  It gave her a chance to just be a child playing with her friend with some dolls while her mom talked to the adults.  That is a normal childhood.  And more than the gifts I brought with me, I am thankful I brought with me a chance just to play like a kid.

After they went home, we spent a few hours in our chairs on the beach watching the kids surf, boogie board, and play in the water while we watched the incredible sunset.  We enjoyed tacos from the Instapot—something so many people have here!—and then I ended up asleep just after 8pm.  It has been a long week, and spending four hours trying to understand conversations in another language is just another level of tired.  I am so grateful for all of my experiences this week and for the open welcome from the family here.  I am blessed to get to be in this experience.
Saturday, February 22
I’m sitting here this morning (with my coffee, of course) watching Dustin and his son Nolan and two of their friends spend the morning surfing.  Since the beach is literally their front yard, this is a daily occurrence.  These families work so hard and struggle through language, politics, culture, discrimination, and opposition in order to make the lives of Nicaraguans better, and somedays it seems time in the ocean and the waves is what makes it bearable for them and allows them to continue the work.  It took them a lot of time and searching to find the perfect location to start their home and their organization here in Salinas Grande, and it is absolutely amazing.  They have a beautiful tiny home (which they insisted was out of financial necessity, not Oregonian trend) and a casita on property that people can rent and come and stay in (it is way nicer than many places I’ve stayed during travel). They also have a two story Roncho (patio) that overlooks the ocean with furniture and hammocks.  This is where I would blog each morning over coffee.  On the front of the property is where they have the kids club with a large kitchen to feed them, as well as bathrooms.  As of now, they have chickens, ducks, two toucans (bought in the parking lot of Price Mart!) and also one dog named Luna that is expecting pups any day.  It is peaceful, remote, and rugged…. But they have water, flushing toilets, and Wifi—so what more could you need!  They did say that I brought a little magic with me, as the weather was beautiful, the mosquitos were virtually zero, and the electricity stayed on for the entire time I was here!  You’re welcome 😊
We took off to spend the afternoon at Playa Hermosa, which was about an hour away.  We tide pooled, explored, chatted, ate lunch, and had a relaxing afternoon before heading back to Leon to eat papusas—a food a lot like a quesadilla, but made with a rice and cheese crust and filled with more cheese and fillings.  The were delicious and all nine of us ate and had a drink for less than $20US.
​
We grabbed some avocados at the local store and raced back to the property to catch my final sunset.  (Seriously, we saw about the last 1 min…) and then relaxed on the beach while the kids played and had chips and guacamole while debriefing the experience.  Another great (and last) day with the fam!